Hold the presses BUZZ Fam, hip hop star Cardi B is set to have a starring role in the upcoming ‘Fast and Furious‘ film that is now in production.

The Up artiste made the revelation while giving some behind-the-scenes looks and insight at her upcoming role and her interaction with her fellow actors.

She is set to star opposite the face of the franchise Vin Diesel. Cardi B related that she was excited to work with the veteran actor. “Being around Vin, he so nice, so dope, he makes you feel comfortable, I’m so excited” she disclosed.

According to Cardi, it was Vin Diesel who reached out to her. “Vin Diesel reached out and he was talking about the role. I’m like, it’s freaking Fast and Furious. Get me there, put me on a plane” she said in the video.

Cardi will be playing the character Leysa, a woman who is said to run her own crew. “I like the fact that I’m representing such a powerful strong woman” she continued.

She also indicates that she takes inspiration from the likes of Ludacris and others who have played roles in the film. “I remember when I saw Ludacris in Fast and the Furious, then to see Some Omar, it makes the hood have hope” she went on to say.

Fast and Furious has been one of the longest-running film franchises and features a group of car runners who try to achieve different goals in each film. It is now set to release it’s 9th iteration of it’s films. 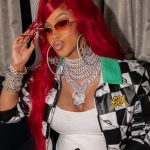 She did give ample warning by indicating her 29th birthday bash would showcase the best of dancehall culture. But perhaps social media was still not prepared for wha…
Previous Next
Cardi BFast and Furious 9Fast and Furious 9 soundtrackVin Diesel
Favorite