Music producer Sean ‘Contractor’ Edwards is confident the latest installation in his Christmas album series will raise the spirits of Jamaicans – especially the women – this Yuletide season.

For the second consecutive year, the man behind Contractor Music Group has released a Christmas compilation album, dubbed Garrison Christmas. This year, however, with Jamaicans having received a slight reprieve from curfews and other COVID restrictions, the project focuses on channeling the ‘sexier side of music’ with the hopes of getting music lovers out of the “COVID funk and into jolly spirits” this Christmas.

The album led by platinum-selling dancehall artiste Charly Black was released on December 17 and will feature the likes of Gyptian, Jahvillani and dancehall newcomers Kashan and Lisa Mercedes among others.

Edwards told OBSERVER ONLINE that he wanted to gift Jamaicans in and across the diaspora, “feel good music for the season.”

“This project will give you just what you need to move away from all the trauma this year has brought and into a good space as we approach the best time of the year.”

“For Garrison Christmas volume 2, I decided to go sexy because we deserve to feel good this time of year, especially the ladies. The entertainment sector has been shut down for almost two years because of the pandemic but it doesn’t mean we can’t still enjoy ourselves,” Edwards said.

“This project will give you just what you need to move away from all the trauma this year has brought and into a good space as we approach the best time of the year. Last year, we had a ‘badman Christmas’ with artistes like Aidonia and Squash and Jahvillani, this year we wanted to move from the gangster talk and channel enjoyment,” he continued. “Charly Black as the headliner for the album knows how to cater to the ladies and so all the songs on the project kinda just follows this lovers kind of vibe. It’s gonna be a sexy Christmas.”

Charly Black whose song on the album is titled Tonight, said the project is just what people need to get them into the Christmas spirit. 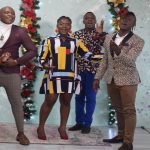 cCurrently available on all digital streaming platforms, the group of creatives have crafted a one-of-a-kind Christmas catalogue dubbed Follow the Star. The six-tra…

Sandals Foundation continues to spread holiday cheer by giving thousands of children across the island brand new toys and games. The gifts will be given through its …

D’Angel grateful for help she got to host Christmas treat

Dancehall artiste D’Angel is expressing gratitude for the help she received in hosting her treat in Spanish Town on Tuesday. Through the Angel’s Foundation, the …

A Jamaican cop, Corporal Andrew Williams, is spreading the Christmas cheer around the Corporate area by giving gifts to a number of children. The lawman, who is from…
Previous Next
Christmas albumschristmas in jamaicacontractor music groupgarrison christmas
Favorite