Reggae singer Julian Marley is quite pleased with the lyrical direction of Jamaican popular music today. Assessing the new sound that has been emanating from the island during the last decade, he says it’s “lyrically on point”.

“The new sound is very positive. It’s not like some ones from our generation which were not as strong as the youths are now cause it’s a learning process,” Julian told BUZZ. “The youths come up and see the realities and truth and know that this music has to come from the heart, more than just singing: ‘Hey I’m drinking some champagne’. Dem realise life is deeper than that, and it’s a greatness to see.”

The Lemme Go singer is, however, concerned about the musical aspect of things. He said Jamaican artistes should not forsake their African heritage for others.

“If mi go to Brazil, mi waan hear samba, mi waan hear 75 per cent Brazillian music, then 25 per cent can be stuff from around the world. If it’s a hit song from somewhere you have to play it,” he started. “When I travel the world…you see all these bands that are not from Jamaica, and they’re playing this authentic reggae music, and when you go to the festivals there’s 15,000 people and they’re singing some reggae music from the 60s and 70s. We’d class that as old music, but yet they’re reaping the rewards of our heritage while we are here sometimes looking at some other people’s heritage and trying to grab their heritage.”

So who is Julian currently listening to?

“The Abyssinians, some old school,” he said. “Sometimes I listen to old school because it carries a certain kind of message. The message hasn’t changed, but we found different ways of saying it. Sometimes I need something that just touches the spirit, and you can directly go into that inner meditation, we call it soul food. We listen to Koffee, Popcaan, Chronixx and our roots family too. What I choose to listen to when it comes to inspiration is way back sounds, and I just take the inspiration of that music and create something brand new. The feeling is found back then in music.” 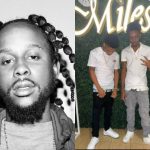 Not only has Bob Marley and the Wailers’ iconic album Legend: The Best Of Bob Marley And The Wailers spent 100 weeks in the top spot on Billboard’s weekly Regg…
Previous Next
Bob Marleyjulian marleyPopcaanReggae monthReggae Month 2020reggae music
Favorite