Ooh la la, what have we here?

The dancehall diva known for her racy performances, did not disappoint as she gave fans an eyeful as she suggestively danced with a female during her set.

During her time on stage the Lifestyle artiste was joined by a female fan who proceeded to gyrate on her while both did a split much to the amusement of those in attendance.

Since being shared online, the video has gotten a lot of tongues wagging on IG.

“Yan yuh flexible bad, big up yuh Fren yuh. Crukus bag a tings” one fan in response to the post.

Another commented, “me just love Yanique ‘Curvy Diva’ perform with her fans”.

“She clean fi real,”  another chimed in .

Curvy Diva is known for her risqué performances even at one point she was seen removing her underwear to a Dexta Daps song while she hosted an event. 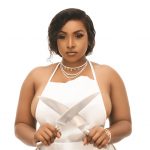 Curvy Diva to embark on US restaurant tour, says she plans to expand into North American market

Shenseea to headline show in Dubai

Dancehall artiste Shenseea is currently in Dubai where she will be headlining a show under the invitation of the country’s government.  The fast-rising danceh…

Yanique ‘Curvy Diva’ Barrett knows that she is viewed as a sex symbol, and it’s an image the dancehall artiste and restaurateur embraces. But she admits th…

The Yanique Curvy Diva Barrett cookbook could be on a bookshelf close to you pretty soon. The restauranteur and artiste announced on Monday that her long-awaited coo…
Previous Next
Clevelandcurvy divaperformanceusaYanique ‘Curvy Diva’ Barrett
Favorite