“The power of a father’s presence in his child’s life is unmatched.” This famous quote by Justin Ricklefs sums up what we’ve seen with many of our favourite Jamaican celebrity dads. These fathers are not only present for the different milestones in their child’s life, but also take pleasure in sharing this journey with their thousands of social media followers.

BUZZ Fam, we’ve curated a list of some of those famous dads who’ve given us more than a glance into the relationship they share with their child/children. As you peruse, bear in mind that this list is not exhaustive, but merely salute to some of the dads we all love for Father’s Day.

‘Mi get a daughter now, so mi haffi move smarter now’, this line from Agent Sasco 2010 hit Something’s Gotta Give is indicative of the kind of father he is.

The reggae artiste, from what he’s exposed us to on his social media seems to have found the delicate balance between being a strict and a kool dad. From taking his eldest daughter on dates, to having his son star in his music video, as well putting his other daughter on a track.

On top of all of that, Agent Sasco has also extended his fatherly knowledge to other children. He’s been a part of the Ministry of National Security’s ‘We Transform’ programme since 2017 as an ambassador and mentor.The programme focuses on facilitating the rehabilitation and reintegration of youth offenders who are placed in the four juvenile remand centres.

Three words come to mind when one sees a photo of dancehall artiste Konshens with his five-year-old son, Liam; copy and paste! The son is a younger version of the Simply Blessing singjay, and he knows it too. In a recent photo on the ‘Gram Konshens let his followers know that Liam couldn’t be anybody else’s son but his. “Of course he’s mine,” he captioned the photo he shared with his 1.1 million followers, adding that Liam shares the “same eye brows, same eye lashes, same lips, same nose, same chin, same belly” and jokingly even the “same shorts.”

Romeich melted all of our hearts in October last year when he flew to the United States to surprise his son Xzander for his birthday. However, many of his followers had come to expect big gestures like those from the artiste manager and businessman who often express how proud he is to be a father.  His fatherly love extends to the 5-year-old son of dancehall artiste Shenseea whom he often refers to as his “second boy”. And recently he revealed that he’s now a #Girldad, saying; “Mi always want wah daughter and see mi get a daughter now, so dem inna trouble.” Translation: That baby is gonna be so spoilt!

Usain Bolt may be the fastest man in the world, but we’re almost sure his one-year-old daughter Olympia Lightning Bolt, is not impressed. The four-time Olympian credits his daughter for making him a better person and has a lot of fun showing off Olympia on his timeline. But Bolt may have a little help raising his firstborn because Olympia is undoubtedly Jamaica’s baby.

Reggae artiste Jahcure and his nine-year-old daughter Kailani Belle Alcock are like two peas in a pod. The two seem to share a love for water and singing and carry themselves with the kind of swag we know is totally hereditary. For Jahcure, “It’s the courage to raise a child that makes you a father,” he revealed in a previous Instagram post. That courage seems to be paying off as the two appear to genuinely enjoy each other’s company.

Jamaican singay Romain Virgo got double the blessings when he welcomed twins in January last year on his birthday. He described the birth of his twin girls as he’s greatest blessings yet, and even recorded a song in their honour. “Mi have a different hunger from mi yute dem bawn” he sings, indicating that they’re not just his greatest blessings, but a source of inspiration as well.

Wayne Marshall has cemented himself as Jamaica’s favourite dad, thanks to him and his wife, Tami Chin Mitchell inviting us into their home via their YouTube channel; ‘Meet the Mitchells‘. The father of four boys has obtained the admiration of many for the camaraderie relationship he’s built with his sons. He also earns points for being so hilarious too! 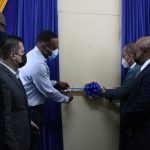 Dancehall star Konshens released Red Reign on Friday (November 12). The LP marks a new era for the artiste who has been steadily experimenting with other genres incl…

Dancehall artiste Konshens has announced that his latest album, ‘Red Reign’ is set for a November 12 release. The ‘Winner’ artiste made the a…

Jamaica’s favourite couple, Tami Chin, and Wayne Marshall are celebrating 12 years of marriage today (Sept 20). And in a fashion that we’ve all come to e…
Previous Next
Agent SascoFather's DayJahcurekonshensromain virgowayne marshall
Favorite