Lafast Motors — which assumed the role of exclusive dealer for the BMW and Mini brands in Trinidad and Tobago on September 18 — is seeking to learn from Jamaica’s top automotive distributor, the ATL Automotive Group.

Lafast Motors director Gregory Farah said the distribution deal solidifies his company’s partnership with ATL Autobahn — importer and subsidiary of the ATL Automotive Group. ATL is responsible for the BMW and Mini master dealer operations in Jamaica and eight other Caribbean territories.

Farah said discussions with ATL Autobahn began earlier this year and materialised into Lafast Motors — which is a new division of Laughlin and De Gannes — which was developed specifically to “anchor” the operations of BMW and Mini in TT.

“Through our partnership, we will be working extremely closely with our colleagues in Jamaica and the wider Caribbean, to learn from their own experiences to make ours perfect,” Farah told the Newday newspaper in Trinidad.

Farah said Lafast has invested in building a state-of-the-art facility in Port of Spain Trinidad and a more compact four-car showroom in San Fernando. Lafast will operate temporarily from the Mini showroom at on 37 Dundonald Street, while BMW and Mini owners in TT will have their cars serviced at two Laughlin and De Gannes locations in San Fernando and Port of Spain.

He said the investment represents a “first” for the automotive brands in TT, and signifies a shift to “employing the international standards established in other regional countries, such as Jamaica, since 2017.

“It is important to know that the development of these showrooms is not just to make us look good. When you purchase a BMW or Mini you are entitled to an enhanced, premium experience. From your first introduction to your sales executive to the handing over of your dream car. Essentially, you choose us to be your family for years to come,” Farah said.

He said BMW is the “number one premium brand” in Trinidad, and pre-orders and down payments have already been made for new cars. They are slated to arrive by the middle of November and the dealership will have the full complement of models by mid-December, he said. 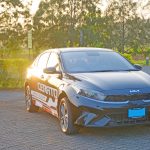 ‘X-citing’ update for the BMW X3

The German luxury auto manufacturers have been long criticised for Russian Dolling their vehicles. That is, taking the same design and simply repeating it (albeit at…

BUZZ gained unfettered access to the 2022 BMW X3 and X4 before they hit the showroom floor of ATL Autobahn, the arm of the ATL Automotive Group responsible for the B…

Strap in folks, this one is going to be controversial. The first step is to decipher the hieroglyphics that is the modern BMW nomenclature for the 218i Gran Coupé. …
Previous Next
ATLatl autobahnatl automotivelafast motors
Favorite